Media Buyers, Dodo’s and Predictions – I am sticking to mine 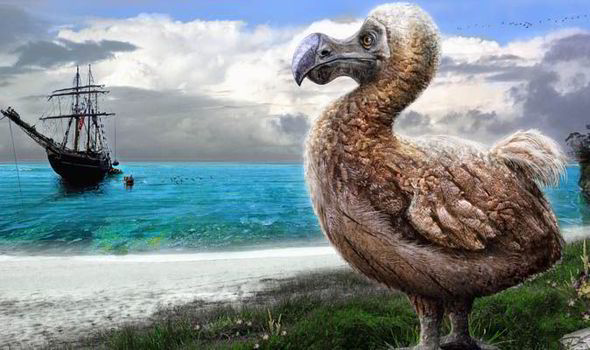 On September 16, 2013, I predicted the death of the traditional media buyer. That date was completely random, as it just happened to be the date I wrote a blog post with the title “Man vs. machine, the advent of electronic buying and the death of the media buyer”. I have since written about this phenomenon many times here on MediaPost.

I predicted the death of the media buyer as we knew her/him within 5 years of that date in 2013. My prediction was based on the fact that, when Wall Street switched to mostly algorithm based trading, they shed about two-thirds of humans who were the traditional traders. Instead, Wall Street started hiring like tech firms, recruiting large armies of programmers and software specialists who could shave of important seconds off each trade, delivering millions into the coffers of the brokers without having to spend any time on the trading floor.

Why am I mentioning this? Because Digiday last week reminded me of my prediction in a post in which they wondered why it seemingly has not come true yet. In their article, they interview several industry leaders to understand if indeed the media planner is still alive. And after reading what these industry leaders are saying, I maintain my prediction that the traditional media planner is on her/his way out.

We learn that the traditional media buyer role is evolving into media data analysts in charge of monitoring and optimizing the automated media buying schedules and plans (regardless of whether they are programmatic or not).

If Bud Light needs young males, or Pampers needs new moms, and they don’t care so much where the GRP’s are delivered as long as they are delivered within whatever the quality and quantity parameters are from AB-InBev or P&G, an algorithm can probably do the job faster and more precise than a human media buyer. Just like Goldman Sachs can beat a human trader with one of their algorithms.

But then we learn about one reason why it may not be in the agencies interest to pursue the inevitable death of the media buyer. And that is because many agencies are in the business of selling billable hours.

The money an agency charges for all the techies are captured in tech fees which the World Federation of Advertisers places in the 40% to 60% range of all programmatic buys. On top of that, agencies charge for the hours of the media buyer who allegedly has been sitting behind her/his desk manning spreadsheets and negotiations to deliver and execute media buys. That is a lucrative money making formula! And agencies are reluctant to give up on all that is lucrative! They can only charge very little margin and overhead on an algorithm.

But the change is inevitable. Just like self-driving cars and trucks and drones, automation will prove to be faster, more accurate and agile doing the job of a human.

So… we have two more years to go on my prediction. Let’s sharpen it a little bit. By September 16, 2018, traditional media buyers will not exactly have gone the way of the Dodo. But in another two years their numbers will have dwindled to one-third of what they once represented, just like the traders who once occupied the stock exchange. Let’s check in again in 2018!